The fastest horse breed of all time is without a doubt the Thoroughbreds. They possess an extensive winning streak record, and if not they are close behind the winning horse. 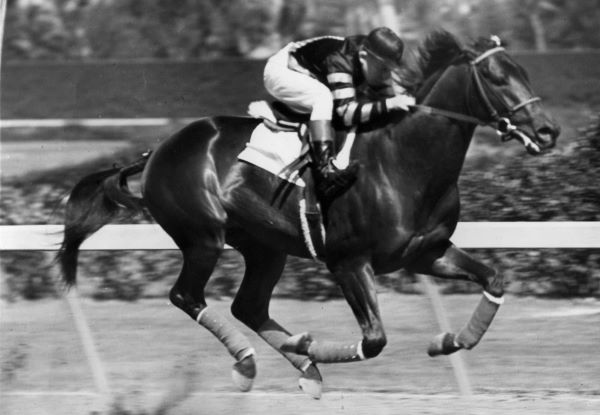 Being the most balanced horse breed, when comparing to the Arabian horse and Quarter breed. Get to know the characteristics that make the Thoroughbreds the fastest throughout history all over the world

History of the fastest horse ever in the world

Monarchos was a stallion foaled on February 9th of 1998. He had a long list of famous purebred ancestors, his sire and grandsire were Maria’s Mon and Wavering Monarch respectively. And his dam and damsire in order Regal Band, and Dixieland Band. He inherited a grey fur that made him stand out from other horses.

This outstanding horse was bred in the USA by James D. Squires, who sold it later to his lifelong owner John C. Oxley for the sum of 170, 000 US dollars. As a racehorse, he had his particular trainer who was the well-known John T. Ward, Jr. who recommended it when the horse was still a colt to Oxley.

He started racing when he was 2 years old, but only had his first win when he turned 3 and took over a small race at Gulfstream Park in the year 2001.

He then became a serious contender for the Kentucky Derby, the most well-respected horse racing stadium, after his participation on the Florida Darby. On this race in Florida, he had an exciting victory. His rider Jorge Chavez commented he just spoke him some words of encouragement and the horse exploded into the finish line.

The final race of Monarchos, also his record winning run began with a  few bumps. However, after a while, he was able to make steady progress going for the outer side of the horse’s flank.

After an astonishing recovery, the grey stallion went ahead of the leading horse at the time Invisible Ink by almost 5 lengths, finishing first. The one to end third was Congaree.

On this day, May 5th, Monarchos won with a fantastic time of 1:59.97 for ¼ miles. Not sure if second to Secretariat a legendary horse that won with 1:59 ⅖, since de Derby was not set for the hundred of the second.

Nevertheless, Monarchos made it to the history books, and died after a long life, breeding many high-priced stallions and mares on October 22nd, 2016 at 18 years of age. His total earning by himself, not his descendants is calculated into 1, 720, 830 dollars.

Fastest breeds of horses all over the world

Thoroughbred is the winner breed of horse in crowning as the fastest throughout racing history.

For a racehorse to be successfully quick many skills and circumstances must be met, along with the inherent abilities of the horse and rider.

Amongst the most determining factors are overall race record, quality of the horse that was beaten, and how brilliant the win was.

Sometimes is not very reliable the information given by different eras, since the extensive amount of factors such as racing surface and pace of the run have a significant impact on such statistics.

To compensate for this and be able to form a standardized format for assessing a horse’s performance, different methods were created. Timeform ratings were introduced in 1984 in England, and the Beyer Speed Figures, in 1992 In the USA. The Thoroughbred holds the Guinness World Record for the fastest speed at 70.76 kilometers per hour.

As mentioned above this is the breed that holds the title for the fastest horse ever in the world. Even if the current record is at 70 km or 44 miles per hour, the average of the decisively speedy breed of horses is usually a bit lower, yet very high in comparison to other kinds.

Bedouins are the first breeder of the Arabian horse; the purpose was to increase the stamina over a long distance, that is why they have a high resistance to this day.

In 1700 they were introduced into the USA, and since then have become a part of the Jockey Club.

They are well suited for endurance racing, as they possess a significant amount of muscle fiber, that allows their body to work for long periods of time. However, not as massive as the muscle of the leaner Thoroughbred, they can be faster on the longer distance count.

There are documented cases of the Arabian horse reaching almost 55 miles per hour, but not quite efficient for a real race scenario.

The American Quarter Horse can attain faster speeds even than a Thoroughbred in short sprints, but it still stays behind on an overall race. Some of the clocked speeds for a short distance are that of 55 miles per hour or 88.5 kilometers per hour.

This is also the breed with the most amount of horses registered, at the staggering figure of 3 million animals, as of 2014.

This horse is not only used as a racehorse, but also as a show horse, participating in rodeos or working in ranches. They have a compact body, which allows them to do speedy maneuvers, well suited to take care of cattle and some English disciplines.

The quarter horse has its ancestor in Arabian Breeds and Thoroughbreds that is why they combine such a sturdy body with incredible speed.

The thoroughbreds are the best-balanced horse breed.

On one side we have the Arabian, with lean muscular bodies, that are able to withstand long distances with higher speed than any other horse breed. On the other hand, the Quarter Horse, with a sturdy body, is well suited for short fast sprints.

Right in the middle is the fastest horse of all times and Guinness record holder, the Thoroughbreds, not only have been the overall race winner but with astonishing recorded speeds.

The races of famous thoroughbreds are exhilarating and a show on their own that cannot be missed by adepts and experts alike. 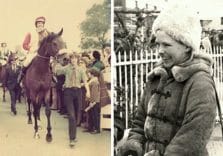 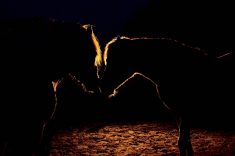 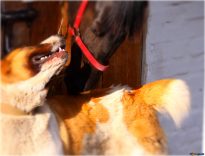